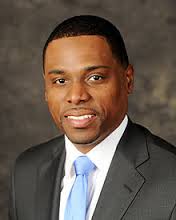 Daron K. Roberts is the founder of 4th and 1 and also serves as director of the Center for Sports Leadership and Innovation (CSLi) at the University of Texas. He spent seven years as an NFL and college football coach after graduating from Harvard Law School. He has been featured in ESPN the Magazine, Bloomberg Businessweek and Sports Illustrated. Currently, he serves as guest analyst on ESPN’s Longhorn Network and is a Lecturer in the Humanities at The University of Texas where he teaches an upper-division honors course, “Leadership Strategy in Sports”.

In the fall before his third year at Harvard Law School, Roberts decided to pursue a career in football coaching and wrote 164 letters to college and professional football teams. The Kansas City Chiefs offered Roberts a training camp internship for the 2007 season. He leveraged that unpaid position into an assistant coach position in 2008. From Kansas City, Roberts went on to coach with the Detroit Lions, West Virginia Mountaineers and Cleveland Browns.

The son of a Baptist minister and elementary school principal, Roberts holds a B.A. in Plan II Honors and Government from the University of Texas (2001), an M.P.P. from Harvard’s Kennedy School (2004) and a J.D. from Harvard Law School (2007). During his tenure at Texas, Roberts was elected Student Body President. At the time, UT was the largest public university in the United States.

Roberts has been recognized as one of the Kennedy School’s 75 Most Fascinating Alumni and a World Economic Forum Young Global Leader for creating 4th & 1, Inc.